All Shook Up performed at the Midvale Performing Arts Center 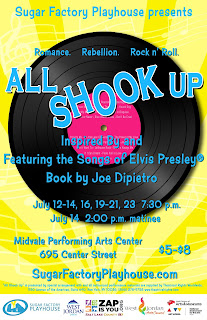 All Shook Up, performing at the Midvale Performing Arts Center, is a humorous modern take on Shakespeare's 12th Night.The book was written by Joe Dipietro, and the play features the songs of Elvis. It features a wide cast of characters all looking for love, and follows them through their hilarious adventures and misadventures as they each work toward their own goals. One of the main characters, Natalie, even goes to such lengths as dressing up like a guy so that the man she's interested in will start paying some attention to her if she's one of the guys!


The cast did a fantastic job. Each member of the cast and ensemble is very talented. My favorite character, I think, was Sylvia, performed by MeriLynne Michaelis. She can really sing!

There is a little bit of crass humor in parts for those who would want to be aware of that. I recommend the play to anyone who enjoys funny romantic comedies, and fans of Shakespeare who would appreciate the similarities between this play, and 12th Night.