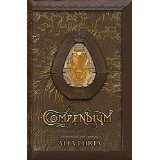 I just finished reading a very exciting book called Compendium by Alia Luria.  The beginning was a little bit slow, but once it got going, I enjoyed this book immensely. I am always a fan of fantasy, and of world building, and the author, Alia Luria did a great job! I loved visiting Lumin and seeing through Mia's eyes. The way the world works, using plants as electrical conduits for their light, heat etc. was fascinating. I loved the twists and turns and turns of the plot, the unexpected surprises, the enemies that turned out to be friends, the friends that- well, I'll just say that part of the enjoyment of this book was learning along with Mia that all is not as it first appears. There were a few occasional errors in conventions, and there were more -ly adverbs than I cared for.   Additionally, there were a few minor cuss words here and there, but nothing over the top. Over all, the book was quite enjoyable, and I would recommend it to anyone who enjoys a good fantasy!

Posted by LoraLee Evans at 12:37 PM No comments:

The LDStorymakers' Conference on May 15-16 was fantastic this year, and along with that, the Whitney Awards Ceremony was great as well!  The Whitney Awards, incidentally, are awards given every year to outstanding LDS authors in various genres.  This year, the winners are: Marion Jensen for his Middle Grade novel, Almost Super; Chris Crowe for his General Youth Fiction novel, Death Coming up the Hill; Kiersten White for her Speculative Youth Fiction novel, Illusions of Fate; Carla Kelly for her Historical Novel, Falling Softly; Amy Harmon for her General Fiction novel, The Law of Moses; Brandon Sanderson for his Speculative novel, Words of Radiance; Sarah M. Eden for her Romance novel, Longing for Home: Hope Springs; and a friend of mine, Josi S. Kilpack for her Mystery/Suspense novel, Wedding Cake.

Congratulations, everyone!
Posted by LoraLee Evans at 11:46 PM No comments: 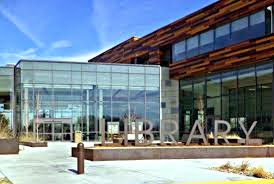 Today, I had a great experience at Spring Into Books, an event hosted at The Viridian Events Center in West Jordan.  Many authors attended this terrific events as well as hundreds of people from grandparents to little kids.  I had the luck of sitting next to Nathan Croft, an author whose first book Homunculus and the Cat published by Curiosity Quills is coming out in August.  The premise, he explained, was that all of earth's myths are true.  There are all sorts of mythical creatures running around, including some Artificial Intelligences who have recently escaped from the Yakuza (The Japanese Mafia).  The Cat, referred to in the title, is a flying kitty who dies in the first chapter.  Fortunately, with nine lives, this kitty doesn't stay dead.  It sounds like an extremely exciting book with lots of stuff going on, and I look forward to reading it!

Mikey Brookes and the rest of the people responsible for putting Spring Into Books together, did a fantastic job!

Posted by LoraLee Evans at 11:17 PM No comments: 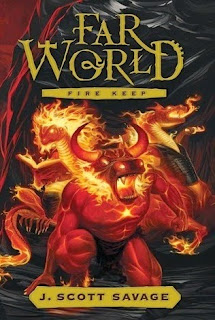 I was so excited to get this book! Finally, I would be able to find out what finally happens with Marcus, Kyja, and the goofy, but lovable skyte, Riph Raph.Fire Keep will not disappoint! It is a fantastic ending to a spectacular series, and from page one, the action and intrigue do not let up.Marcus has no idea how to rescue Kyja, and at the same time, Kyja has no memories. Yet she is still herself in this fiery world of lost souls trapped in Fire Keep through no fault of their own. Kyja continues to help people here, giving comfort and compassion where she can, even as she seeks to find a way out. Even with her memories lost, she can sense that she has a job to do, and works to find out what it is.If you've enjoyed the other three Far World books, you will enjoy this one. I highly recommend it!
Posted by LoraLee Evans at 1:25 PM No comments:

Yesterday, I went down to St. George to visit Diamond Valley Elementary.  What a great visit!  The students were fantastic, and their teachers, too.  And I learned something new!  I've been saying Denouement wrong!  I still can't quite pronounce it right, but I know not to say it the way I've been saying it.  Silly me! 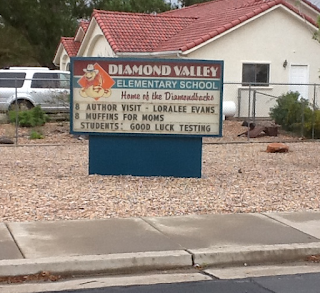 Anyway, it was a great visit.  The students and faculty were very welcoming.  And I was so tickled to see my name up on the school's marquee!

The kids helped out a lot, especially with the little play at the end.  They did a great job.  And they were so willing to participate, to answer questions, and talk about the parts of a story's plot.

I hope that the kids of Diamond Valley Elementary had as much fun as I did.  I really enjoyed visiting them, and I hope that they learned something to use when they write their own books someday!

Posted by LoraLee Evans at 9:00 AM No comments:

The Hope Squad is a group of kids at a given school who support each other and their peers, to keep each other safe.  Specifically from suicide.

To Kill A Mockingbird- by Harper Lee

I've blogged about this book before, many times, but my freshmen have just finished it, and so I wanted to blog about it again.

I cannot say how much I love this book.  The narrator, a little girl nick-named Scout, learns much throughout the book about right and wrong, and how to be an honorable human being.  While she connects with many people throughout the book, her biggest influence is her father, Atticus.  He's a single parent, their mom having died when Scout was too little to remember.  Calpurnia and Aunt Alexandria are there to help out, but Atticus has the bigger share of teaching Scout and her brother Jem about life and how to treat others.  The title To Kill A Mockingbird was very appropriate, I think, because according to Atticus, mockingbirds don't do anything to hurt people, they just sing for people.  There are many "mockingbirds" in this book, good people who haven't done anything wrong, and only want to help others.  Tom Robinson is the first one who comes to mind, a decent man who is blamed for something he didn't do, just because he had the "unmitigated temerity to feel sorry for a white woman."  Atticus himself is also a mockingbird, working hard to serve his family and his community, and getting little back aside from criticism and ridicule.  Arthur Radley is another I can think of, a good man, who after one minor mistake as a young person, is never let out into society again by his overly controlling family.

For myself, my favor for a book is determined by how well it helps people to become better, kinder, more tolerant, etc.

To Kill A Mockingbird is one of the books that does those things for me.  I'm glad Harper Lee wrote it.
Posted by LoraLee Evans at 1:58 PM No comments: