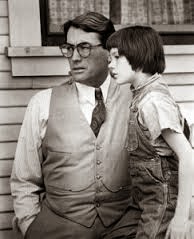 Today, I want to talk about one of the most heroic fictional characters I am aware of:  Atticus Finch.

If you are familiar with the book, To Kill a Mockingbird by Harper Lee, in my opinion one of the greatest books ever written, you will be familiar with Atticus Finch.  He is a lawyer in the small fictional town of Maycomb, Alabama.  He is the widowed father of the narrator, Jean Louise (Scout) Finch, and her brother, Jeremy (Jem) Finch.  While the story is told from Scout's little girl perspective, Atticus seems to be the main protagonist of the story.  Scout has many adventures through the story, including meeting Dill, a boy who becomes a good friend to her and Jem, and trying to get Arthur (Boo) Radley, the neighborhood recluse, to come out of his house.  The main conflict of the story starts, and Atticus shows his noble-hearted nature, when he takes on the case of Tom Robinson, a young African American man falsely accused of raping a white girl.

While it becomes clear to the reader that Tom Robinson couldn't have possibly committed the crime, the town cannot shake itself of its prejudice against people who are African Americans, and treats Atticus badly simply for being willing to defend his client.  Through Scout's eyes the reader sees what a great man Atticus is, and the character it takes him to stand up for what is right, even though he has to stand against years of prejudice to do it.

I love To Kill a Mockingbird, for the wonderful story it tells, the positive message it teaches me, and for the example of Atticus Finch.  Even though he is fictional, I believe that such people like him exist, and I am glad for the hope that he offers humanity.
Posted by LoraLee Evans at 6:36 PM No comments: