The Sound of Music performed by Stansbury High School Drama 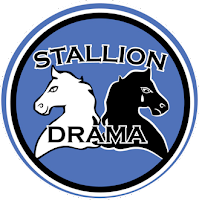 The Sound of Music was adapted from the memoir The Story of The Trapp Family Singers by Maria von Trapp and was made into a stage play in 1959 then later into a movie in 1965, starring Julie Andrews.

The plot of The Sound of Music follows the adventures of Maria who first plans on becoming a nun, but after becoming the governess of the von Trapp family, a large brood of children, and then falling in love with them, and with their widowed father, she changes her plans. Shortly after their wedding however, the family's plans are further changed when Nazis invade their beloved Austria and want to recruit Mr. von Trapp into their navy. He doesn't agree with Nazi philosophies, and so what is the family to do?

I attended the opening performance of The Sound of Music, and it was wonderfully done. Everyone in the cast and crew did a fantastic job with the performance, and I highly recommend it!

Mrs. Mona Farnsworth who taught Drama at Duchesne High School before she retired had nothing but praise for Mr. Glen Carpenter, having gotten to know him when she and he were on a board together quite a few years ago. By watching the plays he has directed, I can see why. I think it is fantastic that he is helping young people hone their skills and build confidence in their abilities and in themselves through drama!
Posted by LoraLee Evans at 10:30 PM No comments:

On Saturday, May 5, 2018, I attended the 10th annual Whitney Awards Gala, an awards ceremony honoring outstanding achievement in LDS writing. There are 10 categories, Middle Grade, Young Adult General, Young Adult Speculative, Young Adult Fantasy, General Fiction, Historical Fiction, Mystery/Suspense, Romance, Historical Romance, and Speculative Fiction. There is also an Outstanding Achievement Award given, an award for Best Novel by a Debut Author, Novel of the Year in Youth Fiction, and Novel of the Year in Adult Fiction.

This year, I was very glad to learn that Robison Wells, the guy who came up with the idea initially, received the Outstanding Achievement Award (though he insists that the credit goes to others). I personally think he's very deserving of the award, and am glad it went to him.

The winner of Young Adult General went to By Your Side by Kasie West.

The winner of Young Adult Speculative went to Ones and Zeroes by Dan Wells.

The winner of General Fiction went to The Fattest Mormon by Tyson Abaroa.

The winner of Historical Fiction was Condemn Me Not by Heather Moore. I read this book earlier in 2017, and really enjoyed it. I'm glad it won!

The winner of Mystery/Suspense was Safe House by Traci Hunter Abramson.

The winner of Romance was Lies Jane Austen Told Me by Julie Wright. Julie Wright is a great friend of mine, and I am very pleased that her book won!

The winner of Historical Romance was Love Remains by Sarah M. Eden.

The winner of Speculative Fiction was The Fifth Doll by Charlie N. Holmberg.

The Best Novel of the Year in Adult Fiction went to Safe House by Traci Hunter Abramson.

Congratulations to all the Whitney Award Winners for 2017!

Posted by LoraLee Evans at 9:42 PM No comments:

Now, they're after the Rumphus the Boar and his talisman, but getting to the boar won't be easy. The Conquerers have plans of their own, and Connor, Rollan, Abeka and Meilin aren't prepared for what the Conquerers are willing to do.

They find themselves in Glen Gavin in their quest for Rumphus, but find themselves dealing not only with a strict, by the book Lord of the Castle, as well as a vindictive enemy to Connor who didn't get a beast of his own, and has now joined the Conquerers.

The book ends on a bit of cliffhanger, but don't despair, because book 3 continues the story!

I recommend this book and the first book Spirit Animals Book 1: Wild Born by Brandon Mull to young readers as well as not so young readers who enjoy middle grade fantasy.
Posted by LoraLee Evans at 2:06 PM No comments:

Justin Morgan Had A Horse by Marguerite Henry

Justin Morgan Had A Horse by Marguerite Henry is an enjoyable story about a horse initially known as "Little Bub" who is given from Farmer Bean to Justin Morgan, a school teacher, as payment for some debts. Justin gives the responsibility of the little horse to Joel, one of his students, and a lifelong friendship begins, including the horse being unexpectedly sold away to parts unknown, and Joel being enlisted in the war of 1812. Will Joel and Little Bub ever be reunited?

This is a sweet and entertaining book with a few scenes of war, peril, and death. But these are not scenes on which the story dwells to heavily. I recommend it to people who love stories about animals, especially horses, and sweet relationships between humans and creatures.
Posted by LoraLee Evans at 1:43 PM No comments:

The Voyage of the Dawn Treader by C. S. Lewis

The Voyage of the Dawn Treader (first published in 1952)
is an entertaining fantasy adventure for young and old, continuing the Chronicles of Narnia by C. S. Lewis. Seasoned veterans, Edmund and Lucy come back to Narnia. The brother and sister have lots of experience with magic and travel between their world and Narnia. But this time, their cousin Eustace Scrubb gets pulled along as well.

It all starts in their cousin Eustace's house when the three of them see a picture of a ship on the wall that begins to move. Before they know it, they're pulled through the picture and into Narnia, or rather, the ocean east of Narnia where they are pulled out of the water and onto the deck of The Dawn Treader. Edmund and Lucy are thrilled to be back (this is their third trip to Narnia) and are especially glad to see their old friend Caspian with whom they had an adventure on their previous trip.

Eustace, however, has an entirely different reaction to being suddenly and magically pulled into a different world. He didn't have much of an imagination to begin with, and to find himself on the deck of a ship in Narnia leaves him extremely traumatized and threatening all sorts of legal action against his new companions.

But will his trip to Narnia and his adventures with Caspian and the others ever change his heart? Read the book and find out! I recommend this book to readers young and old who enjoy fantasy and adventure!
Posted by LoraLee Evans at 12:57 PM No comments: