Review: To Kill A Mockingbird 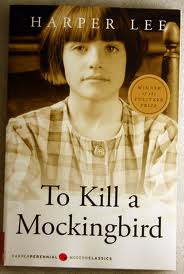 I wanted to submit a review of one of my favorite books in the world, To Kill A Mockingbird, by Harper Lee.  The movie, produced by Universal, was also well done, and I think gave a fairly good interpretation of Ms. Lee's story.  My students and I finished reading the book today, and they were both happy that they'd finished, and sad that it was over, at the same time.

The book, narrated by Jean Louise Finch, (nicknamed Scout) follows her life as well as that of Jem, her brother, and Dill, their friend.  It begins when they are all fairly young, when the greatest concerns they have are their worries about "Boo" Radley, a neighbor who hasn't left his house in years, and about whom they have many frightened and far fetched ideas.  But life does not stay as simple as they would like, and they are forced to grow up a little too quickly when their father, a lawyer, is called upon to defend a black man who has been accused of raping a white woman.

Both book and movie teach, without becoming overly didactic, the value of human life, and of honor and of compassion.  It teaches that while there is ignorance, dishonor, betrayal, and evil in the world, and tragedy too, that there is more good there, than bad.

And that's something I think is important to know.
Posted by LoraLee Evans at 4:51 PM No comments:

My last few posts have been sad news, and this is no exception.  On Wednesday, March 6, 2013, a young boy named DJ Weaver whose family lives in our town, and who was in my son's class at school, was hit by a semi while crossing the street on his bike to get to the bus stop.  He later died at the hospital.

In a way, this hit me harder than the shooting on the 14th of December in Connecticut.  I didn't know DJ personally, but my youngest two children did.  I pray for his family to have peace, and God's comfort with them.

"Oh God of heav'n, send Christ again
Bring in his reign of peace
And make Earth pure for tiny hands
And safe for tiny feet.

Then give back my child to me."*