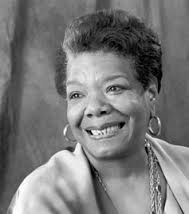 I had the privilege of hearing Maya Angelou speak during my last year of college when I was taking a few classes at Weber State University.  I honestly do not remember what she spoke about, but I remember how I felt about what she said.  I remember what a gracious lady she was, how wise she was, and how she seemed to speak to me personally, though I was in a room of hundreds.    I was impressed with her command of words, and the way her words made me feel.  Even though much of what she spoke about I had not experienced myself, I felt that I could relate to what she was saying.  I felt that she understood humanity.  She had seen much in her life, terrible things and great things, and still she had faith in people, understood them, and believed in them.

She worked hard to overcome so many things; racism, sexism, etc.  Rather than letting her troubles get her down, she became strong.

Oprah Winfrey said of Dr. Angelou, "...The world knows her as a poet but at the heart of her, she was a teacher. 'When you learn, teach.  When you get, give,' is one of my best lessons from her.
"But what stands out to me most about Maya Angelou is not what she has done or written or spoken, it's how she lived her life..."

Dr. Maya Angelou was a great human being.  Even though I did not know her personally, I miss her.

And I hope I can be even a little bit like her.


Posted by LoraLee Evans at 5:07 PM No comments:

Nurk: The Strange, Surprising Adventures of a (Somewhat) Brave Shrew by Ursula Vernon

Nurk by Ursula Vernon is a fun story suitable for children which I may have reviewed on here before, but re-read recently, and enjoyed this time just as much as I did when I read it several years ago.

Nurk, the title character, is a somewhat less brave grandson of the great heroine, Surka.  He has a picture of his brave grandmother in the front hallway of his little house, and he admires her, and her inspiring journal, but clearly doesn't feel like he can be quite as brave as his grandmother.  But he is drawn, somewhat reluctantly, and quite by accident, into an adventure where he finds himself faced with the choice of being brave to save an unjustly imprisoned dragonfly prince, or turning around and going home.

And the choice Nurk makes?  Well, I won't give that away.  But suffice it to say, I highly recommend this book.  It was a fun read!
Posted by LoraLee Evans at 10:12 PM No comments: