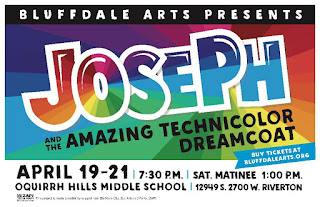 I recently saw a wonderful musical,Joseph and the Amazing Technicolor Dreamcoat, performed by Bluffdale Arts. I've seen this many times in the past, and have always enjoyed it. I really enjoyed it this time, too! The cast and crew of Joseph did a fantastic job. They used quite a lot of little kids in the cast, which I'm sure can be a bit scary for a director, but these little kids did a great job. The adult cast members were pretty great, too!

If you're already familiar with the story of Joseph, the son of Jacob, then you already know how the story goes. But Joseph and the Amazing Technicolor Dreamcoat puts a modern, and hilarious, spin on the story. (Pharaoh has an uncanny likeness to Elvis, for example.) In 1967 Andrew Lloyd Webber and Tim Rice wrote the music and lyrics respectively. It was first performed in 1968, and has been a favorite for many people ever since.  The music is catchy and funny, and the story is upbeat.

Bluffdale Arts is to be applauded for producing such a great musical! My only complaint is that it isn't playing more nights! I hope to see more plays from Bluffdale Arts in the future, and I'm sure they'll be as great as this one was!
Posted by LoraLee Evans at 3:11 PM No comments:

Wrath of the Storm by Jennifer A. Nielson

Jennifer A. Nielsen wastes no time getting the story going Wrath of the Storm, book 3 in her Mark of the Thief series. Nicolas starts out trapped in rocks, uncertain when, or if he will be rescued. One friend reaches out to him in his mind only to be severely punished for doing so, and then...

Well, the book doesn't end right there. But Nicolas' problems are far from over. The Mistress is out to get him, and with all the twists and turns he faces, will Nicolas achieve his goal, protect his family, and survive?

Wrath of the Storm is a book that you will enjoy if you like adventure, fantasy, and non-stop action!

Posted by LoraLee Evans at 4:28 PM No comments:

Paper Chains by Elaine Vickers is a good book with a good message about what makes a family, and why friends are important.

Katie and Ana have their separate struggles, but they also have struggles together. Katie is wondering more and more about her birth family, and Ana wants her family to heal from loss.

Can they work together and strengthen each other? Or will the chains of their friendship break like paper?
Posted by LoraLee Evans at 4:18 PM No comments:

Mustaches for Maddie by Chad Morris and Shelly Brown

Mustaches for Maddie is a well-written story by Chad Morris and Shelly Brown that makes its reader think. Geared toward a young audience, it fits in the Middle Grade genre, but even so, an adult reader can appreciate the conflicts and struggles of the young protagonist.

Maddie wants to impress her peers. Much like any 6th grade would want. She especially wants to impress Cassie, the queen-bee of the 6th grade, and so much so, that she often goes against what she believes she should do in order to get Cassie's attention. But when something happens that is nothing that Maddie or her parents ever expected, she starts looking at life a little differently.

This is a good book with a good lesson from which both young and old.
Posted by LoraLee Evans at 4:12 PM No comments:

The Emperor's Ostrich by Julie Berry

I recently read a delightful middle grade novel, entitled The Emperor's Ostrich by Julie Berry which I strongly recommend to anyone who enjoys fantastical, middle grade stories.

When Begonia's cow, Alfalfa goes missing, that is only the beginning of her problems. Throw in an overly protective ostrich, and an overly spoiled emperor, oh, and of course a magical map that keeps changing, and there are all sorts of adventures that happen!!

If you enjoy funny, middle grade fantasies with ostriches, you will love this book!


Posted by LoraLee Evans at 4:03 PM No comments:

Mysteries of Cove: Embers of Destruction by J. Scott Savage

J. Scott Savage is one of my favorite authors, and favorite people, and his most recent book, Embers of Destruction, Book 3 in his Mysteries of Cove series, is a great book! Trenton and Kallista must rescue her dad, Leo Babbage from the White Dragon who has him, and many other people, captive. But will they be able to do it? And will they survive? Read the book, and find out!

I recommend this book to folks who like dystopian, steam-punk novels with strong adolescent characters, and a great message that is at once not overly didactic, but still very clear.
Posted by LoraLee Evans at 3:44 PM No comments:

The Lion, The Witch, and The Wardrobe, by C. S. Lewis

Possibly the most famous of C. S. Lewis's books in the Chronicles of Narnia, The Lion, The Witch, and The Wardrobe makes clear to the reader why it is so popular when one reads the story contained within it.

Peter, Susan, Edmund, and Lucy have gone to stay at a large house in the country to escape the dangers in the city during World War II. The owner of the house is a curiously open minded old gentleman who lets them do whatever they like and go wherever they go, so long as they don't upset the housekeeper, Mrs. MacCready, or interfere with her when she is showing sightseers around the old house, which is also a historical building.

While staying at this old house, Lucy discovers an interesting characteristic of an old wardrobe in an empty room. The others don't believe her, and even when Edmund discovers the interesting thing for himself, he denies. The reason comes clear later on, after all four hide themselves in the wardrobe, trying to keep out of the way of Mrs. MacCready who is showing a group around the house.

That particular characteristic is that sometimes, the wardrobe doesn't have a back, and instead leads to another world called Narnia.

Narnia, when the children get there, is enchanted with a never ending winter caused by the evil White Witch, Jadis. Edmund, on his first trip to Narnia, fell under Jadis's influence. (That's why he denied having been to Narnia before.) Because of Jadis tricking him, Edmund deserts the others to find Jadis, which causes all sorts of trouble and danger. But there's one hope. And that is Aslan, the lion. Not just any lion, but the Son of the Emperor Beyond the Sea. And how will Aslan help out? Read the book and find out!

I heartily recommend this book to everyone, especially people who enjoy fantasies written for children, but can also be read and enjoyed by adults as well.

The Importance of Being Earnest by Oscar Wilde, At The Sugar Factory Playhouse 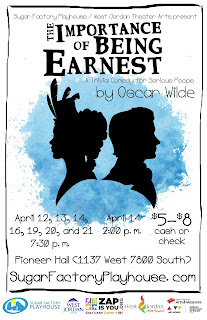 I recently saw a delightful and well-done performance of a play I enjoy, The Importance of Being Earnest by Oscar Wilde, performed by he cast of The Sugar Factory Playhouse.

The story follows two friends, Jack and Algernon, who fall in love with two young ladies who mistakenly believe that both of them are named Earnest, and proclaim to their sweethearts that they could only truly love a man named Earnest. The two friends then go through all sorts of hilarious attempts to hide their true names from the girls, leading to all sorts of mix-ups and deceptions that left me and the rest of the audience laughing all through the play. I loved the ending!

The Sugar Factory Playhouse is a charming, classical building that houses a great group of talented actors, and I highly recommend it!

Every couple of months The Sugar Factory Playhouse performs another play, and I look forward to going to more plays again in the future!


Posted by LoraLee Evans at 8:55 PM No comments:

Rudyard Kipling, and His Poem, "If"

Rudyard Kipling's poem "If" is one of many works that I like by him. He is the author of The Jungle Book, Rikki Tikki Tavi, and Just So Stories as well as others. If is a poem of his that I like as well.

If you can keep your head when all about you
Are losing theirs and blaming it on you,
If you can trust yourself when all men doubt you,
But make allowance for their doubting too;
If you can wait and not be tired by waiting,
Or being lied about, don’t deal in lies,
Or being hated, don’t give way to hating,
And yet don’t look too good, nor talk too wise:

If you can dream—and not make dreams your master;
If you can think—and not make thoughts your aim;
If you can meet with Triumph and Disaster
And treat those two impostors just the same;
If you can bear to hear the truth you’ve spoken
Twisted by knaves to make a trap for fools,
Or watch the things you gave your life to, broken,
And stoop and build ’em up with worn-out tools:

If you can make one heap of all your winnings
And risk it on one turn of pitch-and-toss,
And lose, and start again at your beginnings
And never breathe a word about your loss;
If you can force your heart and nerve and sinew
To serve your turn long after they are gone,
And so hold on when there is nothing in you
Except the Will which says to them: ‘Hold on!’

If you can talk with crowds and keep your virtue,
Or walk with Kings—nor lose the common touch,
If neither foes nor loving friends can hurt you,
If all men count with you, but none too much;
If you can fill the unforgiving minute
With sixty seconds’ worth of distance run,
Yours is the Earth and everything that’s in it,
And—which is more—you’ll be a Man, my son!
Posted by LoraLee Evans at 3:50 PM No comments: