The Way of Kings by Brandon Sanderson I recently finished an incredibly long, yet incredibly good book titled The Way of Kings by Brandon Sanderson. In it, we follow the life of Kaladin, an honorable young man who has been unfairly betrayed time and again, yet somehow finds the courage, with the help of his little pal Syl, to continue to help people, especially the men on his bridge crew.
The reader also follows Dalinar, one of the leaders of this society, who, searching his heart as well as the teachings of a book entitled The Way of Kings, comes to understand that the best kind of leader is one who supports and sincerely cares for those he leads.
We also get to know Shallan, a young woman whose first goal to steal something important from her mistress changes as she learns to care for the lady as a friend and not just as a teacher, and also as she learns unexpected truths about her world that changes the way she looks at things.
The Way of Kings is the first book of what is intended to be a long series, and not everything is resolved, as can be expected. Much though, is satisfyingly resolved with enough left over to keep the reader interested in what is coming next.
The book, despite its length, was a great story, and toward the middle, I was actually glad it was so long. Mr. Sanderson paced it just right, with the story flowing exactly as it needed to in the right parts. I really enjoyed it, and recommend it for anyone who enjoys fantasy.
Posted by LoraLee Evans at 4:37 PM No comments: 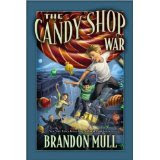 The Candy Shop War was a great story. It tells of the adventures of friends, Nate, Pigeon, Summer, and Trevor and the "secret candy" made my Mrs. White, the owner of "The Sweet Tooth Ice Cream and Candy Shoppe" the local candy shop that's recently opened in town. At first, everything seems like a fun, harmless adventure, until the kids start to realize they're getting in over their heads, and Mrs. White might not be the kindly, harmless friend they think she is.

I don't want to give much more away, but I will say that it was a fun story to get involved in, and adults and children alike, who enjoy a fun adventure involving magical powers and tasty candy, will love this book.
Posted by LoraLee Evans at 2:21 PM No comments:

Here is an excerpt from a news article on yahoo:

TOKYO – A ferocious tsunami spawned by one of the largest earthquakes on record slammed Japan's eastern coast Friday, killing hundreds of people as it swept away ships, cars and homes while widespread fires burned out of control.

Hours later, the tsunami hit Hawaii but did not cause major damage. Warnings blanketed the Pacific, putting areas on alert as far away as South America, Canada, Alaska and the entire U.S. West coast. In northeastern Japan, the area around a nuclear power plant was evacuated after the reactor's cooling system failed.

Police said 200 to 300 bodies were found in the northeastern coastal city of Sendai, the city in Miyagi prefecture, or state, closest to the epicenter. Another 137 were confirmed killed, with 531 people missing. Police also said 627 people were injured.

I served a mission in Sapporo, Japan in the early 90s, and Sapporo is on Hokkaido, not far from the epicenter of the quake.

The hardest thing for me, is not knowing what is going on there, and if my friends on Hokkaido are alright. Even though I haven't had contact with them in a long time, I still think about them, and I hope they're okay.

On the way to and from work, a commute of 40 minutes, I listen to books on CD, and over the past few years, I've listened to some great books, including Wind in the Willows, The Hobbit, White Fang, and others.
I recently finished a story that I was very impressed with. Alma, by Heather Moore, was a wonderful story based on events from the Book of Mormon. Ms. Moore did a fantastic job researching ancient American life, and bringing well known characters, and others from the Book of Mormon to life, and showing the kinds of people they may have been. It also introduced some characters that are not mentioned by name in the Book of Mormon, but were no doubt a big part of all the goings on, like Alma's wife, Maia, and others.
One thing that really impressed me, is how Ms. Moore handled her bad guys, chiefly her main bad guy, Amulon. She was able to show Amulon's motives and his reasons for doing things very believably without turning him into a stereotypical villain.
This was a great book that I enjoyed listening to, and I recommend it very strongly to anyone who enjoys well written, historical fiction!
Posted by LoraLee Evans at 6:46 PM No comments: