A Christmas Carol by Charles Dickens

A Christmas Carol by Charles Dickens, first published in 1843, is a classic that will likely be a part of many people's Christmas traditions for centuries.
Ebenezer Scrooge is a hard-hearted, merciless man who does nothing illegal, but is just unkind to everyone with whom he comes in contact, including his own nephew. When the story opens, we see how heartless he is when his employee can't even stoke the fire to get warm, and later when he rebuffs his own nephew's attempts to invite him to Christmas dinner, and then two gentlemen who are seeking charitable donations to benefit the poor.
Later that night, his business partner, Jacob Marley who has been dead for seven years exactly, (he'd died seven years before the story began, on Christmas Eve) returns as a ghost to give Scrooge a warning that he must change his ways. But he is not the only ghostly visitor to come to Scrooge.
Most everyone is familiar with the story, and the journey that Scrooge takes with the Ghosts of Christmas Past, Present, and Future, and the things he realizes and the changes he undergoes.
I like the story because it shows that people can change for the better, and I like the additional characters, particularly Tiny Tim, whose inclusion helps readers to see that Scrooge's change isn't just because he fears for his own soul, but that he has developed empathy for others as the story progresses.
I recommend the story to anyone who enjoys Dickens' writing, classical stories, and Christmas.
Posted by LoraLee Evans at 11:56 AM No comments:

A Christmas Carol by Charles Dickens is read in this abridged version of A Christmas Carol, read by Patrick Stewart. While it is abridged, and much of the original text by Charles Dickens is missing, the main story is still there, and very enjoyable. I like Mr. Stewart's voice and the changes he makes when reading various characters.
I recommend this enjoyable reading to fans of Patrick Stewart, and fans of the story who don't mind much of the original text being left out.

Posted by LoraLee Evans at 11:58 AM No comments:

SoJo Choral Arts and Sounds of the Season 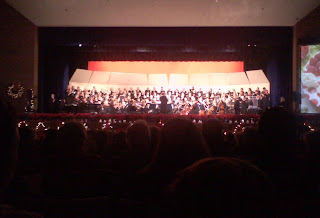 The South Jordan Choral Arts performed their fifteenth annual Sounds of the Season yesterday. They gave two presentations, a matinee at 2:00, and then an evening performance at 7:00. The performances were presented in the theater at Bingham High School. The choir and orchestra were fantastic, and presented such Christmas songs as Joy To The World, Jesus, What a Wonderful Child, and O Come, Emmanuel, as well as several others. I was very glad to have had the chance to go, and hope to be able to attend next year!

Posted by LoraLee Evans at 11:37 AM No comments: