Another wonderful character from Dickens' A Christmas Carol is the character of Fred, Scrooge's nephew and only living relative, who is happily married, and, it's implied, is fairly young. (He's never given a last name, and it isn't Scrooge, since it was his mother who was Ebenezer's sibling.) He's a static character who starts the story as a very good person, and ends it as a very good person. While it's true that Fred is a static character, I learn a lot from him and because of him that isn't mentioned straight out.

Despite the cold way Scrooge treats him, Fred keeps trying. One can see how much of his mother he has in him the way he is constantly cheerful, and completely unoffended by Scrooge's curt dismissal. I honestly don't know if it's a difficult thing for him, or if it's something that just comes naturally. Does he have to grit his teeth mentally to keep from stooping to Scrooge's level, or is his good nature something that is an inborn part of his character, and it's easy for him to be nice, even when others aren't? I honestly don't know. Either way, I like Fred. He is a sincere, genuine person who really cares about Scrooge, and means what he says when he tells Scrooge, "I ask nothing of you. I want nothing from you. Why can't we be friends?"

He isn't doing what he's doing in the hope of buttering Scrooge up with the expectation of getting his wealth when Scrooge dies. If he did that, he wouldn't be doing something that he knows Scrooge doesn't want him to do. (Asking him to Christmas dinner year after year, and probably dropping in cheerfully now and then throughout the year to check on him and ask him to other gatherings.) If he was interested in buttering Scrooge up, he'd do something with which Scrooge was more comfortable, or something that would impress Scrooge, not clearly annoy him (but which Fred knows would be good for Scrooge in the end).

Towards the end of the story, when a penitent Scrooge shows up at Fred's house, hoping to come to dinner, Fred doesn't hesitate to make him welcome, shaking his hand so gleefully that "It (was) a mercy he didn't shake his arm off." His forgiveness of Scrooge is without hesitation and immediate. Again, I think it's his mother coming out in him again.

Of Fred's lines, my most favorite is the one when Scrooge is berating Christmas and says of the holiday, "Much good may it do you. Much good it has done you," Fred replies with, "There are many things from which I might have derived good, by which I have not profited, I dare say. Christmas among the rest. But I am sure I have always thought of Christmas time, when it has come round--apart from the veneration due to its sacred name and origin, if anything belonging to it can be apart from that--as a good time; a kind, forgiving, charitable, pleasant time; the only time I know of, in the long calendar of the year, when men and women seem by one consent to open their shut-up hearts freely, and to think of people below them as if they really were fellow passengers to the grave, and not another race of creatures bound on other journeys. And therefore, uncle, though it has never put a scrap of gold or silver in my pocket, I believe that it has done me good, and will do me good; and I say, God bless it!"

Fred embodies the true meaning of Christmas. Both that it celebrates the birth of Jesus Christ, and additionally, that it is a time to remember that people have value, and we need to treat them as they do. That's good advice not only for Christmas time, but for all the year!

Posted by LoraLee Evans at 5:17 PM No comments: 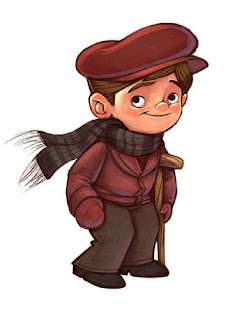 Tim Cratchit, best known as Tiny Tim, is a minor but extremely important character in Charles Dickens' A Christmas Carol. He is small and crippled (probably afflicted with either Renal Tubular Acidosis, or Rickets, though Dickens never specified his disease). He is a vital motivator in getting Scrooge to change his ways, and is important to the audience to help us see that Scrooge's change is more altruistic than it would seem without Tiny Tim being there. Without Tim, the audience might think that Scrooge changes his ways simply to avoid his own wretched, lonely end; whereas with Tim in the story, we can see that Scrooge changes his ways because he realizes just how much his selfishness has hurt other people, and is willing to adjust his behavior so as to be able to help Tim and others.

In addition, Tiny Tim's presence helped Dickens drive home a point that was very important to the author; the great disparity in Victorian England between the wealthy and the poor. Without Scrooge's help, Tim was doomed because his family wouldn't be able to afford to treat him, but with the extra income his life is saved.

Dickens seemed to be very sensitive and aware of the societal problems in Victorian England, and wanted to make other people aware of them as well. Using Scrooge, Tiny Tim, Christmas time, and Scrooge's miraculous change, I am certain he helped many people of his age to think a little bit more about the needs of their fellow beings, and offer a little bit more help than they otherwise might have. I'm sure it did, because the story certainly does that, today.
.....

Dickens, Charles. A Christmas Carol. 1844
Posted by LoraLee Evans at 8:40 PM No comments:

As I mentioned a couple of posts previously, I like Charles Dickens' Christmas Carol. I think the message is a very positive one, both about Christmas, and about the possibility that people can change for the better. Over the years, there have been countless movies and plays done of A Christmas Carol, and one that I have enjoyed for many years, is the Muppets' version titled, appropriately, The Muppet Christmas Carol. Kermit stars as Bob Crachit, Miss Piggy stars as his wife, Emily Cratchit, and Michael Caine stars as Ebenezer Scrooge.

As with all Muppet performances, the cast is a mix of humans and Muppets, with plenty of hilarity mixed in the plot, and more than once instance of fourth wall breaking, as is customary in movies with Muppets.

The one thing I didn't completely like, was that there were two Marleys, (Jacob and his brother Robert) instead of just one as there is in the book (just Jacob). But that was a very minor thing, and was more a personal preference that there being anything actually wrong with it.

The very awesome Jennifer Bennett generously allowed me to be a guest blogger on the Author's Think Tank Blog. She gave me free reign to write about anything related to making great stories, and so I decided to write about something that all writers want to do well: helping our readers suspend their disbelief. I came up with six tips to do that:

1. Build Your World.
2. Remember Common Sense.
3. Do Your Research.
4. Create Convincing Characters.
5. Keep Your Narrative and Dialogue Consistent with Your World.
6. Keep Your Own Rules.

Read more about these six tips here. All of these, I feel, are important to remember when writing to help our readers immerse themselves into the story, and want to follow along with it wherever the author leads them.
Posted by LoraLee Evans at 11:38 PM No comments:

Review of A Christmas Carol by Charles Dickens

At school, I've started reading the story A Christmas Carol by Charles Dickens with my students. Most people are familiar with the story, for good reason. It's an inspiring story of repentance, forgiveness, and of making amends.
Scrooge, at the beginning of the story, is a misery old man who has wasted his life away, worrying more about gaining wealth than gaining friends.
I found it interesting that Scrooge wasn't not a person who, in the eyes of the law, had done anything illegal, exactly. He'd never robbed any banks, never gone out of his way to physically hurt anyone. Everything he'd taken, had been taken legally. He didn't break any laws. Yet Marley, who died seven years before the story began, warned him that if he doesn't change his ways, he'd up a chained, miserable spirit like Marley is. So what is it that made Scrooge such a wretched person, exactly?
Well, let's look at his conversation with Marley. When he'd told Marley that Marley had always been a good man at business, Marley lamented, "Business?! Mankind was my business! Their common welfare was my business!" Marley went on to say, "How often did I walk through crowds of my fellow beings with my eyes turned down, and never lifted them to that blessed star which led the wise men to a poor abode!"
So it wasn't so much what Scrooge did wrong, as it is what he didn't do right.
He wasn't kind. He did not help others. He did not make it a concern of his to recognize the value and contributions of other humans. He didn't take into account that other people had very real, if unseen, needs that he could easily meet without having to spend a penny of his own money. How much easier he could have made Bob Cratchit's job just with a kind word, or a smile, like Scrooge's own previous employer, Fezziwig had done for him. And of course, he starts learning and remembering these important things as he has his successive visits with the Spirits of Christmas Past, Present, and Future.
And as he saw, during his visit the ghost of Christmas future, if he did not act to help Bob Cratchit's family, then  tragic things would happen to Tiny Tim. Not by Scrooge doing anything illegal, but simply by his inaction.
Fortunately, as everyone familiar with the story knows, Scrooge came to understand the error of his past choices, worked to change himself, made restitution for his wrongs, and aided Bob Cratchit's family when they needed it.

I love this story, because not only does it teach me that people can in fact, change their ways and become better than they were, but also how important it is, not just to avoid doing bad, but to make an effort to do good.

Posted by LoraLee Evans at 2:12 PM No comments: