My Book Kits and Cubbyholes is a Whitney Award Nominee! 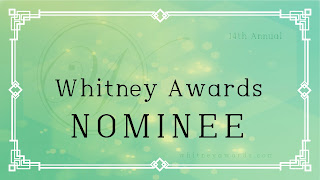 I am really excited to announce that my book Kits and Cubbyholes is an official nominee for the Whitney Awards! There are several categories that are recognized during the Whitney Awards, General Fiction, Romance, Historical Romance, Mystery/Suspense, Speculative, YA General, YA Speculative, YA Fantasy, and Middle Grade. There are also overall awards for Novel of the Year, Novel of the Year Youth, and Best Novel by a Debut Author. After books are nominated, and placed into their categories (mine is Middle Grade) a committee assigned to that category reads the nominated books and they choose the five finalists. The finalists in each category will be announced in early February of 2021, and the Whitney Award Gala will be held in May of 2021. Even if I'm not a finalist, I enjoy going. It's a wonderful event, and I love the opportunity to support the authors of great books!
Posted by LoraLee Evans at 6:32 PM No comments:

My Newest Book: Kits and Cubbyholes!

I am so excited to announce that my latest book has been published!  D. Donovan, Senior Reviewer, Midwest Book Review had this to say about my newest book, Kits and Cubbyholes:

'Twelve-year-old Will leads a good life. He's found work and a home in Mister Wilberforce’s house, a friend in eleven-year-old Nellie, who is teaching him to spell words, and leads a fine life, for an orphan, after living alone on the streets of London.

His memories of the day he met Mister Wilberforce, when everything changed, feel murky and incomplete, however. When he encounters strange little animals that appear to be speaking to one another, some pieces of the puzzle of his life begin to fall into place.

As Will stumbles into an adventure that includes a group of disparate children and a fireplace that leads him into another world, young readers are treated to a story that is peppered with observations about social and cultural relationships and different forms of adversity: "Will found himself smiling hesitantly. Jax appeared to be the leader of this group of friends, but he didn’t seem domineering. Despite their different races, the children treated each other like equals. Was that how life was in America? But it couldn’t be so. America was terribly dependent upon slavery from all that Will understood. This comfortable amity between these children befuddled Will, yet at the same time, it pleased him."

Will's search for the portal that will lead him back home isn't the only purpose of this story. The tale moves from raccoons and time travel to encounters with historical figures and kids charged with finding their way home under impossible circumstances that challenge their perceptions of the world.

Loralee Evans crafts a fine adventure in Kits and Cubbyholes that moves from a boy's singular good fortune in a revised life to his ability to take charge of his own future.

Middle grade readers will find the characterization well-done, the dialogue and dialect particularly convincing and believable, and the adventure portion nicely paced. It's not too fast, but is captivating, as Will participates in an adventure with newfound friends from the 21st century and confronts the mystery of what his future will bring.'

Posted by LoraLee Evans at 4:08 PM No comments:

Little House on the Prairie by Laura Ingalls Wilder


Little House on the Prairie by Laura Ingalls Wilder is an enjoyable tale about little Laura moving with her parents, Mary, and baby Carrie from their home in the Big Woods, to a little house they build on the prairie. Through various adventures, from a prairie fire to meeting Native Americans for the first time, Laura learns and grows, finds new things, and learns to let things go.

The novel is told in chronological order, though each chapter is very much its own short story, and is good for bedtime reading between parents and children.

It is an enjoyable tale for children who are interested in learning about the settling of the west by white pioneers.

Posted by LoraLee Evans at 7:42 PM No comments:

Kingdom Keepers: Disney After Dark by Ridley Pearson is the first book in the Kingdom Keepers series. In this first book, readers meet Finn and his four friends. At the beginning of the story, the kids' images are made into holographic images to act as guides through Disney World in Florida. At first this is fine until Finn and the others realize that when they fall asleep, they wake up in their holographic bodies inside the park. And when the kids meet an imagineer named Wayne, they find out some sinister stuff is going on. Disney villains are trying to sabotage the park, and are trying to take it over. And Wayne fears these bad guys won't want to stop at the park, and move on to the whole world!

As the kids work together following various clues to stop the bad guys, they have all sorts of adventures.

This book, intended for about ages 9-12, is an exciting beginning to the series. Kids and adults who love Disney, and especially who have imagined what it would be like to sneak into a Disney park after dark, would enjoy this book!

Posted by LoraLee Evans at 7:21 PM No comments: