The Wizard of Oz presented by Duchesne High School

Duchesne High is currently performing The Wizard of Oz and will be performing it tonight and tomorrow night at 7:00 pm both times. I attended on Saturday, and enjoyed the performance very much. The play is based on the book, written in 1900 by L. Frank Baum. 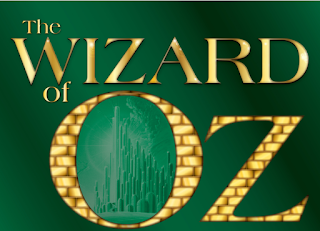 The main character, Dorothy, and her dog Toto, need to find their way home after her house is picked up by a tornado and set down in the land of Oz. Glinda, the good witch, tells her to seek the help of the Wizard of Oz in order to get back home, and she sets off on the yellow brick road to find him. On the way, she meets the Scarecrow, the Tin Woodsman, and the Cowardly Lion who decide to help her on her quest. But they are hindered by the Wicked Witch of the West. Will they get the Wizard's help? Or will the Wicked Witch of the West get to them first?
Duchesne High's Drama department has done a great job, and I recommend the play!
Posted by LoraLee Evans at 1:44 PM No comments:

Treasure Island by Robert Louis Stevenson is a classic adventure story for many reasons. The plot is fun, the characters are likable (or dislikable) in fun ways, and the adventure, going after buried treasure, is fascinating for all sorts of age groups.

Jim Hawkins is the main good guy, a young man in his early teens, who first meets Billy Bones, a salty old sailor who has a secret. After old Billy Bones dies, Jim and his mother find a treasure map in his sea chest. This begins his adventure, pitting him and the other good guys against the main (and satisfyingly dislikable) bad guy, Long John Silver, and his dastardly minions.

The crew sails off together in the Hispaniola, Jim not knowing at first what John Silver and his minions have planned until he overhears their evil schemes while hiding in an apple barrel.

Will Jim Hawkins and the other good guys be able to defeat the bad guys, or will the bad guys get them, and steal the treasure as well? Read the book and find out!
Posted by LoraLee Evans at 12:15 PM No comments:

The movie Ferdinand (2017) starts off with little Ferdinand, a young bull who would rather take care of flowers and be kind than fight the other little bulls, saying goodbye to his father who is about to head off to the arena to fight the matador. But when the trailer returns without his dad, Ferdinand becomes confused and frightened. A door left ajar in his barn gives little Ferdinand the chance to escape, and he runs away from the farm that raises bulls just to fight. He makes it to the countryside, and to the flower farm of little Nina and her father. They welcome him into their home, and there Ferdinand grows up in peace and tranquility. But when he becomes an adult, an innocent visit to the local town's flower festival turns things bad for Ferdinand after he has an unfortunate run in with a bee.

While things become difficult for Ferdinand, he never lets go of his principles to be peaceful and kind to others, and he uses these personal standards throughout the movie.

The 2017 version of Ferdinand is based on the children's story The Story of Ferdinand first published in 1936 by Munroe Leaf and illustrated by Robert Lawson.

I like this story, as well as the book upon which it is based, and the short movie Ferdinand the Bull produced by Walt Disney Productions in 1938.

I think the message of this story is an inspiring one. Ferdinand's example shows us that it is possible to have great power and yet use it wisely and in kind ways to help others, rather than to hurt them. This is a good message for children and adults, and I strongly recommend this movie as well as the book and short movie.

Ferdinand was directed by Carlos Saldanha and produced by Blue Sky and Twentieth Century Fox Animation. It is rated PG for action scenes, and has no bad language. It is suitable for young children and up.

Adventurers Wanted Book One: Slathbog's Gold by M. L. Forman is the first book in the Adventurer's Wanted series, which follows the adventures of young Alex Taylor who sees a strange sign in the window of a bookshop he often passes. The sign reads "Adventures Wanted" he looks away, then back again, and the sign says, "Adventurers Wanted. Apply Within". Looking at the sign again, it's back to what it originally said, and naturally intrigued, the young man goes into the shop, meets Mister Clutter, and suddenly finds himself whisked away on an unexpected adventure in a strange land people with friendly elves, dwarfs, and other folk, and things much less friendly.

Will he and his friends succeed in their quest? Read the book and find out!

Young people who enjoy fantasy adventure will enjoy this book!
Posted by LoraLee Evans at 4:18 PM No comments:

Mysteries of Cove: Fires of Invention by J. Scott Savage

One of my favorite things to do, is listen to audiobooks when I'm driving. I just finished Mysteries of Cove:Fires of Invention the first book in the Mysteries of Cove series by J. Scott Savage. Thirteen year old Trenton Coleman lives in Cove. A city entirely enclosed in a mountain because, as the leaders say, the outside air was poisoned by too much invention. As a result, invention is outlawed. Trenton's problem is that he is a born inventor! When he crosses paths with fourteen year old Kallista Babbage, the daughter of the notorious Leo Babbage whom authorities claim accidentally killed himself and many others making an "invention", then interesting things start to happen! Finding parts and clues left behind by her father, the two friends start to build an invention in secret, and begin to realize that their safe haven may not be as safe as they once thought. And while others may not listen to what they have to say, the two friends may be the only hope Cove has for its survival!


Posted by LoraLee Evans at 4:58 PM No comments: