I came across this lovely Ute poem, and wanted to share it. I don't know the original author.

Ute, North American
Posted by LoraLee Evans at 9:10 AM No comments:

I was very fortunate today to participate in the Kanab Writers' Conference which is held every year in Kanab. I taught a class entitled Helping Readers Suspend Disbelief, and I really enjoyed it. The attendees were great! They made great comments during class and really helped to contribute. I enjoyed visiting with them, and I hope they learned some useful ideas about helping readers suspend disbelief.

The ride down was long, as was the ride back, and because of the trip, I couldn't stay in Kanab for very long. I did get to eat lunch with the other conference attendees, and enjoyed listening to the keynote speaker who gave some great advice about the legal side of writing. (Contracts, protecting intellectual property, etc.)

Next year, the conference will be held again in October, on (I believe) the 12th and 13th. It's a bit of a drive for most people, unless you're lucky enough to actually live in Kanab, but it's a great experience! Check out the Kanab Writers' Conference page on Facebook, HERE!
Posted by LoraLee Evans at 9:29 PM No comments:

Bram Stoker's Dracula is a story that has stood the test of time for good reason. The antagonist Dracula, is terrifyingly real, the protagonists heroically brave (especially Quincey Morris, my favorite) and the story is one that people find themselves able to relate to. Not because we're all going to have to face down with a real live (ahem, real un-dead) vampire at some point, but that we can all relate to the feeling of uncertainty and concern in the face of seemingly overwhelming odds that the heroes face, yet still face it with determination. As Van Helsing said, "Devils, or no devils, or all the devils at once, it matters not; we fight him all the same." The spirit that the heroes, namely Van Helsing, Mina Harker, Jonathan Harker, John Seward, Arthur Holmewood, and Quincey Morris all possess is something mightily encouraging to a reader of the book. It helps me personally, realize that I too can face fearful situations with courage. And it reminds me of another encouraging quote by Neil Gaiman: "Fairy tales are more than true: not because they tell us that dragons exist, but because they tell us that dragons can be beaten."
Posted by LoraLee Evans at 4:45 PM No comments:

Inside Out, a movie from Disney Pixar, directed by Pete Docter, is a fun kids' movie, though it's great for the whole family, about what goes on inside our heads, namely the head of an 11 year old girl named Riley, mostly as she (with her emotions in tow) goes about adjusting to a move. All her emotions (anthropomorphized, of course) are endearing in their own ways. Joy is my favorite, but Fear, Disgust, Anger, and of course, Sadness, are all great, too.

At the beginning of the story, Joy likes being in control, and doesn't understand Sadness's place in Riley's life. But as she and Sadness find themselves on an unexpected adventure, and Joy gets to know Sadness better, she begins to realize that their girl Riley can learn from both Sad experiences as well as happy ones.

How she goes doing that, made a brilliant story, and I highly recommend Inside Out for everyone!

Posted by LoraLee Evans at 3:29 PM No comments:

A More Perfect Union directed by Peter N. Johnson and written by Tim Slover is a movie that I have found I enjoy very much, for its educational and historical value. It was also directed, written, and acted very well.

It was filmed in 1989, and depicts the struggles that James Madison, George Washington, Ben Franklin, Alexander Hamilton and the other founding fathers went through in order to create the Constitution.

Learning about the Constitution in school, I never considered the debates and struggles that the creators of the Constitution went through in order to bring it into existence. I've always been reasonably familiar with the Constitution, and considered its rules, excepting the ones on slavery, to make sense. The legislature, in particular, with the number of representatives a state has in the House of Representatives as being proportional to a state's population, and the number of senators in the Senate as always being two, always made logical sense to me. So I was surprised that in the movie there was so much debate and extreme emotion involved in coming to this conclusion.

I found myself admiring James Madison for his dedication to helping America come to a stronger federal government, and at times, I found myself shaking my head at how stubborn he could be. I came to a deeper appreciation of why he is called the Father of the Constitution from watching this movie.

This is a good movie for history teachers to show to their students to help them come to a deeper appreciation of what the founding fathers did to bring about the Constitution.

Read more about the movie HERE, or HERE.
Posted by LoraLee Evans at 5:05 PM No comments:

On September 5, 1977 NASA launched a rocket into space. Aboard that rocket, was the Voyager spacecraft, whose mission was to explore the solar system, and beyond. The Voyager had a couple of jobs. One, again, explore the solar system more thoroughly than before (you can only see so much from the surface of the earth) and, possibly, to contact alien life out there. For that second purpose, a record, known as the Golden Record was included on Voyager. On the Golden Record were put songs from Earth from many different cultures, greetings in many different languages, sounds from nature, etc.

The Voyager performed the first part of its job magnificently, and sent back to Earth breathtaking pictures of the outer planets that we could never have seen from earth; the moons of Jupiter, and the rings of Saturn, for example. But will the Golden Record be found by alien life, particularly alien life intelligent to figure out how to play it, and realize that we were here? Honestly, probably not. But that's really not the important thing. We put Voyager out there, and the Golden Record is on it, and the chance is there that it will be found by someone smart. And that's what matters. As the creators of Voyager believe, "Dare Mighty Things."

Posted by LoraLee Evans at 8:24 PM No comments: 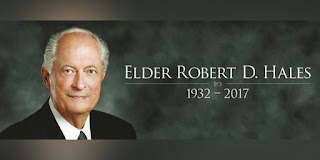 This past Saturday and Sunday, Sept. 30th and Oct. 1st the LDS church had its semi-annual General Conference. I watched it on my TV and with friends, and really enjoyed it. The talks were, as always, inspiring, uplifting, and helpful. One sad thing, however, was that on Sunday, between the morning and afternoon sessions, Elder Robert D. Hales passed away. He was 85. An article in The Salt Lake Tribune entitled "Mormon apostle Robert D. Hales dies between conference sessions after a life dedicated to the faith he loved" by Peggy Fletcher Stack and David Noyce, said of him:

"When Robert D. Hales was a young teenager living on Long Island, his father took him to the Sacred Grove in upstate New York, the same forested sanctuary where Mormon founder Joseph Smith — at about the same age — had reported seeing heavenly messengers more than a century earlier.
'There we prayed together,' Hales said in a biography posted on the LDS Church’s website, 'and dedicated our lives.'
That lifetime of dedication to the faith he loved — including various leadership posts in his local Mormon congregations, more than 40 years as an LDS general authority and 23 years as an apostle — ended at 12:15 p.m. Sunday, when Hales died at age 85."

Read the full article HERE.
I deeply appreciate the examples of people like Robert D Hales and others who live their lives the best way they can. It reminds me that even in times of difficulty, I have the power to choose to do my best to do what is right.
***
Stack, Peggy F. and David Noyce. "Mormon apostle Robert D. Hales dies between conference sessions after a life dedicated to the faith he loved." Salt Lake Tribune. 2 October 2017. Web.
Posted by LoraLee Evans at 7:14 AM No comments: