Rush Revere and the First Patriots by Rush Limbaugh

Rush Revere and the First Patriots by Rush Limbaugh is a fun way for kids and adults to experience history. It is the second book in the series, the first book being Rush Revere and the Brave Pilgrims, and in my opinion, it is just as fun as the first. 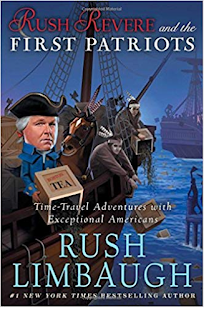 In this second book, Mr. Revere, a substitute teacher at Manchester Middle School, is teaching in place of Ms. Borington, the regular history teacher. But Mr. Revere has something that Ms. Borington doesn't have. He has the ability to travel to any time in history where something happened that affected the United States. He doesn't have this skill on his own, though. He has a time traveling horse named Liberty who can talk, and can travel to specific events in American history.

In this episode, four students, Tommy, Freedom, Cam, and Elizabeth are able to travel through time to periods just before the American Revolution began. They meet people like Paul Revere, Samuel Adams, Benjamin Franklin, King George, and others who were participants in that period of history.

Tommy, Freedom and Cam are nice kids, Elizabeth is not. She's a power hungry child who wants to change American history so that King George knows about the Boston Tea Party before it happens. She is a decidedly unpleasant child, and I would enjoy watching what happens to her in continued episodes. Perhaps she will change for the better, and learn that Freedom and Liberty both the concepts and the people) are pretty great.

I recommend this book because of its fun characters, and its exploration of historical events in a creative and entertaining way.