Manu Bennett, an actor who has played in multiple movies, was gracious enough to come visit the school where I teach on September 28, 2015.  One of his roles was Azog the Defiler in the Hobbit movies.  (Those of you who know me, or have read this blog before, know my opinion of the Hobbit movies directed by Peter Jackson, but I do NOT hold that against Mr. Bennett.)

In the morning of the 28th, we didn’t even have it planned, but we got a phone call saying that he was in the area, and would be happy to come visit with the high school kids.  Of course, we accepted, and were able to fit it easily into our schedule.

Manu Bennett is from New Zealand, and is Maori.  One of the big reasons why he wanted to come to our school specifically, was because he wanted to get to know the Native Culture in the area; the Utes.  He was in Salt Lake for ComiCon, and wanted to come visit and connect with the People.  Maori culture, he pointed out, has very similar philosophies to Native American cultures. During his talk, he mentioned that he had participated in the sweat lodge the night before with Chief Henry and others, and had a very positive experience there.

During his visit with us, we learned that Mr. Bennett's life hasn't always been easy.  When he was young, for example, he lost his mother and brother in a tragic car accident.  But he talked about how acting helped him rise above negative experiences, and express himself in positive ways.

His career, he said, didn’t come quickly or easily.  But one day, while he was living on the beach, a mother whale and her baby came by.  He got to swim with them for a time, and he felt that it was a message from his people that he need to get doing things.

He talked about how in Maori culture it is important to “lift up your tongue” meaning, do what you need to do to express yourself.  And acting was that for him.  It helped him make good choices and stay away from bad things, like drugs and alcohol. 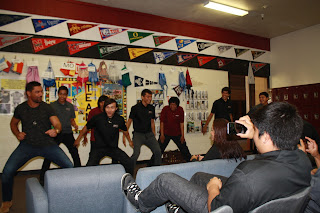 One fun thing that he did with some of the boys before his visit with us finished, was the Haka.  The Haka is a traditional way for Maori men (only men do it) to get ready for battle.  He even taught the boys part of the chant for the Haka, so they were able to perform it with him.

The Haka most traditionally performed is called Ka mate.  It starts with the leader asking the rest of the men, “Ka rite?” (“Are you ready?”) Then all the men chant, “Ka mate, ka mate, Ka ora, Ka Ora!”  (“Will I die?  Will I die?  Will I live?  Will I live?”) and there is more to the chant, which Mr. Bennett did, though he only taught the first part to the boys.

During the questions time, one person asked him if he had a family, and he mentioned that he is married, and has three little girls, all given traditional Maori names.

One impressive thing about Mr. Bennett's visit, is that afterwards, he stayed for a very long time, signing autographs for every person who wanted one, and posing for pictures.  He was very kind, and treated each person like an individual, and he didn’t leave until everyone who wanted an autograph had one.  From what I have seen, Manu Bennett is a very genuine, sincere person, and I am grateful he took the time to come to our school.

I think this was a visit that will leave positive memories in the hearts and minds of the students of URHS for the rest of their lives.
Posted by LoraLee Evans at 4:41 PM