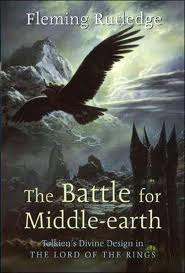 It is hard to believe that it is August already, and school is just around the corner once more. I have been reading a very good book this summer, entitled The Battle for Middle Earth by Fleming Rutledge.

In the book, among many enlightening ideas that Ms. Rutledge puts forth, is the idea that "It is human nature to want to divide up the world into Good and Evil, always with ourselves and our own group on the Good side." And, by extention, putting those who are not like "us", on the Bad side. It is easy to believe oneself to be comfortably justified. Doing so, allows a person not to have to think very deeply, or to examine himself, and his own inner workings, or to admit faults and realize that change is required, or to go through the pain of that needed change, or to understand that his first impulse may not be the best thing to do, or require himself to comprehend that others have worth, ideas, opinions and preferences that are at least as worthy as his own.

It requires work, and often pain, to look at oneself, and admit need for improvement. But it is always worthwhile to do so.

From the book, but quoting Mr. Viggo Mortensen, "The most enlightened beings in Middle-Earth are conscious of the ubiquity of good and evil in neighbors, strangers, adversaries, and most important, themselves. There can be little future in adopting a permanent policy of 'an eye for an eye.' If we were all regularly to put into effect such an inflexible approach, we would all soon be blind, as Gandhi pointed out."

Ms. Rutledge went on to say: "Victor Havel of the Czech Republic, hero of the Velvet Revolution, wrote that during the period of Communist rule it was often impossible to distinguish between those who had collaborated and those who had not; the line, he said, 'did not run clearly between "them" and "us", but through each person.'"

It is futile on many levels, to ruminate on the poor choices, or perceived poor choices of others. For one, no one but God can fully understand and fully judge a person. It's fine, in fact it's necessary to take steps to protect oneself, and if necessary, to avoid people one knows to have made dangerous choices, but it is not our place to condemn and certainly not our place to gloat. We simply do not know enough, and must leave it to God. And gloating, or being either overtly or secretly pleased with someone's shortcoming, or perceived shortcoming, makes the gloater into the monster he wants his enemy to be. For another reason, a person, thinking to set himself up as judge may be making his decisions based on on a faulty premise. In other words, one something that isn't even true. And finally, the only person that any one person has absolute and complete control over, is himself. That is especially true of attitudes and beliefs. While a person may have influence over others, in the end of all things, the only person he can change, is his own self.

One of the main themes of Tolkien's work, according to Ms. Rutledge, was that "...it is about the universal propensity of human beings (and angels) to fall into evil unless they are aided by..." (And I believe -choose to accept the aid of-) "...power from that 'unseen but ever-present Person."

One of the last things Ms. Rutledge said in the introduction of her book, was "One hallmark of responsible hope is honoring those "Numenoreans" among us, those people in our world who, in spite of their imperfection and - yes - sin, nevertheless, like Tutu and Nelson Mandela, embody the noblest and higest among us. In the presence of such people, the 'finger of God' has intruded into History."

It seems to me, from my experience, that the greatest, (truly greatest) people in the world, people like Mother Teresa, William Wilberforce, Harriet Tubman, the individuals mentioned in the previous paragraph, and others achieved greatness because they were too busy doing good to worry about looking good, or to justify themselves by busily putting themselves (in their own minds) in the "Good" camp while putting opponents in the "Bad". They were just too busy simply doing what was right.
Posted by LoraLee Evans at 12:13 AM

wow, that sounds like a fascinating book. AS an obsessed fan of all things LOTR, I'm sure I'd enjoy it. Thanks for sharing!

Tamara, Thanks for your comment. It is really a good, eye-opening book.