The Screwtape Letters by C.S. Lewis

The Screwtape Letters by C.S. Lewis, first published in 1942, is an insightful book that looks at the world from the view of a devil. Screwtape, the master, is coaching Wormwood, an apprentice tempter as Wormwood works to guide his "patient" toward evil and away from good. It is an interesting look at how not only devils, but mean people as well, think, and how they seek to build themselves up by destroying (sometimes literally, sometimes emotionally) other beings. I liked how Screwtape talked about his and Wormwood’s philosophies of consuming other things to feed themselves made perfect sense to him, and the “Enemy’s” (God’s) philosophy of “filling the universe with tiny copies of himself” didn’t make any sense to their ultimately selfish philosophies, and therefore must have some ulterior motive behind it. It was interesting to see how people whose every thought is focused on self ultimately can’t or won’t understand selflessness, so to comfort themselves, they decide that an act that is selfless by someone else can’t be, and therefore must have a sinister, selfish bent to it since they can’t or won’t, understand anything else. I also found it insightful at the end when *spoiler* Wormwood failed, that Screwtape turned on Wormwood without mercy. It showed how selfishness, by its own nature, inevitably turns on itself. An endnote by Mr. Lewis mentioned how he hadn’t enjoyed writing The Screwtape letters, though it had been easy to do so. For myself, I appreciate that despite the fact that he had not had fun writing it, that he had done so anyway. 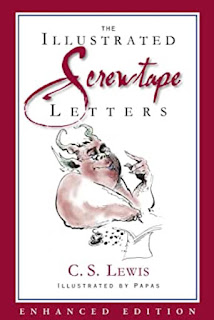 Posted by LoraLee Evans at 6:38 AM